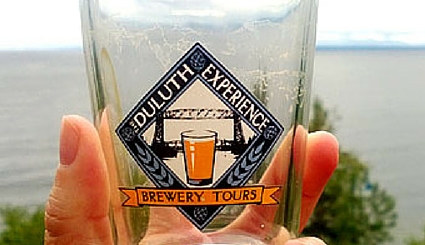 When you think of Duluth, the word “culture” probably doesn’t come to mind. Words that come to mind might be “Northwoods”, “vacation”, “Lake Superior”, “why do people live there?”, “is it always this cold?” (it’s not, by the way). But with its expansive history, exploding brewery scene, and excellent dining – Duluth certainly has culture. Cue in The Duluth Experience. The Duluth Experience was founded in February of 2013, over the love of craft beer, wanting a way for people (residents and visitors alike) to connect with this city. I was able to sit down with Kris McNeal and talk about The Duluth Experience – where they have been and where they are headed.

Kris came on board with The Duluth Experience in March of 2014 as the company’s first official employee.  Kris grew up in the outdoors. As a kid, his family had a cabin near Lutsen and he spent a lot of his time along the North Shore. As an adult, Kris has gone on numerous outdoor adventures such as biking down the West Coast from Seattle to the Mexican border and spending the summer of 2012 biking around all five Great Lakes: biking 5,521 miles in 97 days. Because of his extensive (and ridiculously impressive) outdoor experience, Kris was brought on to start their adventure program as well as redevelop the curriculum for the brewery tours. Slowly, he began running the operation side of the business and is now the chief operating officer and co-owner.

So you’re looking for adventure…

Since Duluth was named the best town in America in 2014, The Duluth Experience has seen an increased interest in their outdoor adventure tours. With mountain biking and kayaking tours receiving the most interest. Kris explained that Duluth was recently named a “Gold Level Ride Center” by the International Mountain Bicycling Association. Duluth is one of only six cities in the world to have this title and because of this, an increased interest in mountain biking in the area is expected.

Although interest in mountain biking is expected to grow, kayaking still currently holds the greatest interest. People live in and visit Duluth largely because of Lake Superior. She’s a force of her own, and people want to get out on the big lake and experience that themselves. The Duluth Experience is offering kayak tours for you to get out on the water and see the Tall Ships in a brand new way. Tours will be two or three hours long, meeting at 8th Street Beach on Park Point. Thursday’s tour will include the “parade of ships” where you can sit in the harbor watching the ships come in.

What about the beer?

If you are in to craft beer – The Duluth Experience’s brewery tour is a must. You’ll get picked up in front of the Fitger’s Complex and start your tour of three breweries. On the tours, you’ll get a behind the scenes look at the three breweries you’re visiting – while being able to sample beers they have on tap.  Dinner takes place afterwards, and is included in the cost of the tour (alcoholic beverages at dinner are not included).

I went on The Duluth Experience brewery tour for a bachelorette party. And let me just tell you, these guys are saints. Not only did they put up with a dozen overly excited ladies, but the tours and transportation was seamless. We didn’t have to worry about driving, our sample glasses were filled, there were snacks on the bus to eat between tours, our pre-chosen meals at Lake Avenue were ready for us almost as soon as we got settled in to our table.

I would absolutely take the brewery tour again, whether for another special event or just a fun night out.

With being labeled one of the best outdoor cities in America, its unpredictable weather, and having the greatest of lakes, Duluth has seen an increase in visitors from out of state and out of country. Because of this, The Duluth Experience is thinking of potentially adding guided, multi-day trips for those coming from far away looking to explore Duluth for more than a few hours.

Kris’s favorite thing to do in Canal Park? “Even after living in Duluth for 13 years, watching the ships never gets old. Especially watching from a kayak.”