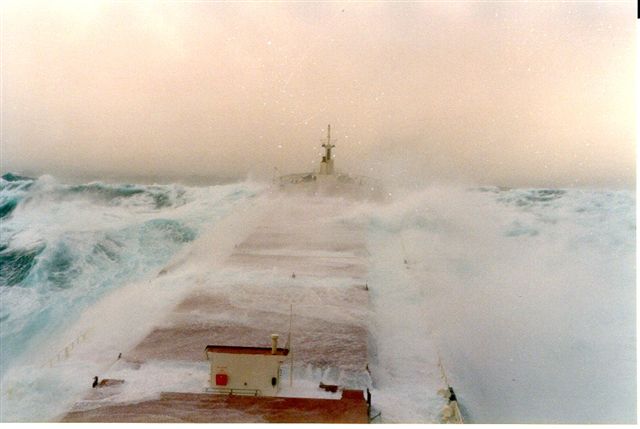 The month of November breathes force into Lake Superior each and every year.  For those of us lucky enough to experience the strength of Lake Superior, it marks the time when fall is coming to end, and winter wishes to take over — but the lake fights the change of seasons with all its might. The “Gales of November” occurs when cold, dry air from Northern Canada converges with warm, moist air from the Gulf of Mexico over the Great Lakes. On top of the mixture of air, all of this is stirred up with the warm summer water of the Great Lakes.  The result from this is one of nature’s most unpredictable times. Wind speeds can reach over 50 miles per hour, and waves look like something from an angry ocean. Yet, from the shoreline, these storms are treated with respect and awe — witnessing them is an experience that no one should pass up. The “Gales” of November” got its name from a song by Gordon Lightfoot about the sinking of the Edmund Fitzgerald. The SS Edmund Fitzgerald was an American Great Lakes freighter full of taconite pellets that sank in a Lake Superior storm on November 10, 1975, with the loss of the entire 29 crewmen. Radio transmissions looking for the Fitzgerald or any survivors lasted until 9:30 pm on November 13th, 72 hours after the last communication from the Fitzgerald: “We are holding our own.” Each year, on the anniversary of the wreck of the Edmund Fitzgerald, Split Rock Lighthouse hosts a remembrance event where the lighthouse and fog signal remains on throughout the day, then goes silent for a bit while the names of the lost crew members are read and a ship’s bell is rung in their remembrance. If you’re looking to learn more about the Gales of November, the DECC is holding a two-day educational, fundraising and networking event.  This event helps better bring the Lake Superior community together to learn about Lake Superior, Great Lakes lighthouses, shipwrecks, maritime history and diving technology. There will also be a trade show and silent auction to help collect funds to preserve and maritime the Lake Superior Maritime Visitor Center.