Your Guide to Grandma’s Marathon Weekend 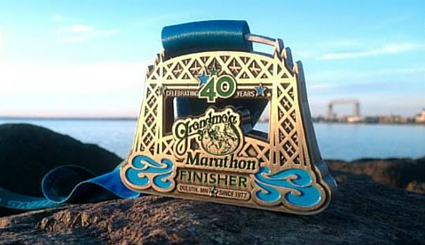 About a month from now, thousands and thousands of people will be coming to Duluth to participate in and watch Grandma’s Marathon. Being its 40th Anniversary, 2016 will be a big year for Grandma’s. The race will have a record number of participants; over 20,200, from all over the world for the weekend’s races and activities. Read on to learn about Grandma’s Marathon, how to successfully navigate the busy weekend in Canal Park, and make the most out of your race weekend.

Grandma’s Marathon began in 1977 when local runners planned a race from Two Harbors to Duluth. The first year consisted of only 150 participants. Fast forward four decades later, and Grandma’s Marathon is a nonprofit organization with one of the biggest races in the country.

With the increase in popularity over the years, Grandma’s Marathon has developed other weekend (and year round) races, beyond the full marathon. During the marathon weekend for instance, there is also the Garry Borjklund Half Marathon, Whipper Snapper Races (for those 14 and under), and the William A. Irvin 5K.

The slogan for Grandma’s Marathon, “World class event. Small town charm” couldn’t be more accurate. Grandma’s Marathon one of the largest marathons in the country and is highly organized. But, what separates Grandma’s from other races is the level of emotion that runners experience. The community welcomes, encourages and supports you through the entire weekend, not just the race.

Race packets need to be picked up before the race on Thursday or Friday. Packets are not available to pick up on race day. Thursday, packets will be available to pick up between 4pm – 8pm. Friday packets may be picked up between 10am and 11pm. Both days, packets will be located at Paulucci Hall at the DECC. The Essentia Health Fitness Expo will be happening Thursday and Friday at the DECC as well. Check out over 100 booths with the latest products in the athletic industry!

Don’t forget to load up on carbs before the big race while you’re loading up with your new gear. Michelina’s All-You-Can-Eat Spaghetti Dinner is an annual tradition that happens the Friday before Grandma’s Marathon. Located in Pioneer Hall at the DECC, the Spaghetti Dinner is $12 for adults, $6 for children between the ages of five and 12, and free for those ages four and under. Enjoy an unlimited amount of spaghetti with marinara sauce (with or without meatballs), Caesar salad, bread, and dessert. The 26.2 mile race starts in Two Harbors, Minnesota and follows the North Shore of Lake Superior back to Duluth. During the race, Lake Superior is at your side for most of the race. There is something so calming and encouraging to be running along the same body of water for the entirety of the race. The race is relatively flat. The only hill you’ll hear people talk about is the infamous Lemon Drop Hill. Lemon Drop Hill is right after the 22 mile mark and it is steep. While it’s not a long hill, its steepness has a tendency to psyche runners out (especially after running 22 miles). But remember, you can do it! You’ve trained so hard to be here, don’t let this hill stop you!

The other difficult race section to be aware of is the last mile. You’re running through Downtown Duluth on the cobblestone, people are lined up everywhere to cheer you on, you get to the intersection of Lake Avenue and Superior Street and now you’ll just take a left here and you’ll be done; you can practically see the finish line! Right? Nope, not quite so easy.

You’ll run all the way through Downtown, turn on to 5th Avenue West and be promptly greeted with another hill. Just power through, you’re so close to being done at this point. Once you’ve conquered the final hill, you’ll continue to run through all of Canal Park. You’ll pass the Great Lakes Aquarium, the DECC, and the William A Irvin. After what feels like a hundred turns and loops, you’ll finally swerve around the last corner and you’re there! Two blocks away is the finish line. Crowded with people and cheering, the short rest of the way is a breeze. Once you cross the finish line, grab your medal, T-Shirt, thermal blanket, drink tickets and snacks – it’s time to celebrate your accomplishment! Fuel Up After the Race:

If you’re looking to grab a bite to eat after the race, here are a few restaurants in Canal Park that should be able to accommodate larger groups. Remember, Grandma’s Marathon is one of, if not the, busiest weekends in Duluth. That being said, please be prepared for longer than normal wait times at restaurants.

Old Chicago: Grab a beer and some pizza and relax after your run! Old Chicago is located on Lake Avenue near The Suites Hotel.

Grandma’s: In the spirit of the weekend, there’s no better place to grab a bite to eat than Grandma’s Restaurant. While you’re there, try their famous Chicken Wild Rice soup!

Green Mill: Check out their legendary pizzas and great pasta! Green Mill is located on Lake Avenue near Adventure Zone.

For a full list of restaurants in Canal Park (and a few of our favorite dishes) check out our dining guide. In addition to several restaurants and shops, Canal Park is home to several hotels. Whether you are looking to be on the water, closer to the bustle of Canal Park, or relaxing on Park Point; you’ll find exactly what you’re looking for. The Tents are a huge part of Grandma’s weekend. Both Friday and Saturday night, Grandma’s Marathon’s “Rock the Big Top” tents have food, drinks and live music to be enjoyed. IDs will be checked at the gate and events will happen in rain or shine!

Friday Night: Gates open at 7 and tickets are $20 for the evening. The musical guest for this evening is Smash Mouth with special guest Shane Martin.

Saturday Night: Saturday night event is 21+ and tickets are $10, gates open at 7pm. Musical guests for Saturday are Coyote Wild, GB Leighton and Duluth’s own Big Wave Dave & the Ripples.

Tickets for both nights may be purchased for a discounted price of $25, but you must be 21+.

Good luck, runners! We will be running with you and cheering you on. Have any questions on Grandma’s Marathon weekend? Just ask us on Facebook!